Fancy colored Montana Sapphires, heat-treated
Sapphires were first found in Montana in 1865 by early gold prospectors mining the Missouri river near Helena. These sapphires were the first sapphires found in the United States that were of gem-quality. Several gravel bars along the Missouri river held not only a fortune in gold, but a vast array of sapphires that became known as Fancy Montana Sapphires, due to their large variety of fancy colors. These beautiful sapphires, first thought not to be very valuable due to their pale colors, and detrimental to gold miners whose sluice boxes they plugged, later became one of the many reasons Montana is known as “The Treasure State.” With heat-treating, a common permanent method used to enhance the color and clarity of sapphires, these pale stones became vibrant and intense in color with the treatment. While the most common color is a pale blue/green, many other colors can be found. The rarest color to find in Fancy Montana Sapphires is a true red, which is technically a ruby, and this color is almost never found. 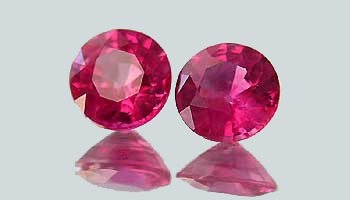 These true red sapphires, at only .05 carats each, are technically rubies and are exceedingly rare.
Several sapphire bars can be found along the Missouri River, including the Spokane Bar, the Dana Bar and the El Dorado Bar. The El Dorado bar is one of the most famous bars due to its large deposits of both gold and sapphires. The El Dorado strike was one of the few mining operations that was allowed to operate during World War II, due to its large quantity of sapphires available for use as abrasives for the war effort. In more recent times, the El Dorado bar was a fee-digging area where diggers could pay a fee and be able to dig for their own sapphires. 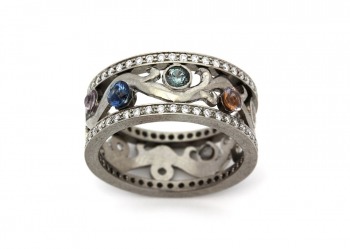 Custom piece created by the Gem Gallery
In the early 1900s, the Missouri river was dammed near the El Dorado bar area, forming Hauser Lake. More recently, the area was subdivided for lake homes; and now private owners have the rights to dig on their own property, but it no longer operates as a fee-digging area. There are, however, two small commercial mining operations currently working to extract both gold and sapphires in this area. Across Hauser Lake from the El Dorado bar is the Spokane Bar mine. This is operated as a fee-digging mine. The sapphires from the Missouri river deposits have been known to produce the largest sapphires from Montana.
The gold rush sent prospectors up every river and creek in Montana in search of gold. In some cases, gold was not found, but sapphires were — and in abundance! One of the creeks being prospected for gold was Rock Creek in western Montana, in what became known as the Sapphire Mountains. Although gold was not found, in 1892, sapphires in a vast array of colors were discovered becoming the location where the largest variety of colored sapphires found together in one location. Many of the sapphires along Rock Creek were very small in size and spherical in shape. These small round gems were gathered up, bagged, and sent off to Switzerland to be used and cut into round watch bearings. Sapphires of this nature were literally shipped by the ton for this purpose. The Rock Creek deposit is still active and is now most commonly referred to as Gem Mountain. 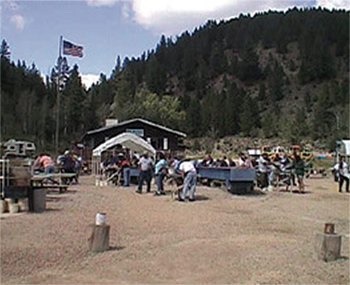 Gem Mountain sapphire mine
Since discovery of sapphires in Rock Creek in the late 1800s, the sapphires have been commercially mined on and off throughout the years. In more recent times, Gem Mountain has operated a fee-digging area, allowing rock hounds and hobbyists a chance to dig for sapphires directly from the mountain. While fee-digging on the mountain has stopped, visitors can still purchase sapphire gravel from Gem Mountain to find their own treasures. Gravel can be purchased on-site by the bucket, with all the tools needed supplied by Gem Mountain for sifting; or it can be taken home and sifted.

Another site of sapphires in Montana is the Dry Cottonwood Creek area. Sapphires were first found here in 1889, and they have been mined on and off commercially since then. The Dry Cottonwood area near Butte produces a sapphire that has very similar characteristics to the sapphires found at Gem Mountain. This sapphire area is not open to the public; but if you know what to look for, sapphires have been found in many creeks in the region, although not in abundance. 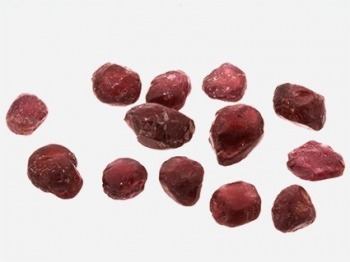 Montana rough garnets
In addition to Fancy Montana Sapphires and Yogo Sapphires, Garnets can also be found in Montana. Many locations across Montana produce Garnets, often of commercial, not gem, quality. One of the most well-known locations is Alder Gulch, which was one of the richest gold strikes in Montana, is still commercially mining garnets for many industrial uses. They are also found in abundance in the Ruby Reservoir and Ruby Valley. Ruby Valley is a misnomer, as the garnets were initially misidentified. The quantity of garnets in this area is so great that the “sand” around Ruby Reservoir is reddish in color.