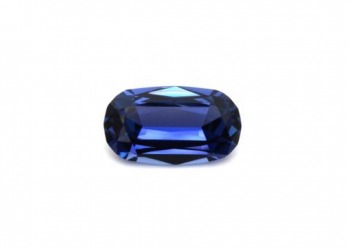 Montana Yogo Sapphire
Yogo Sapphires are the most precious sapphires found in North America. They are considered to be among the finest sapphires in the world. These unique gems come from only limited area, named Yogo Gulch, located in the Little Belt Mountains of Montana. First found accidentally by gold prospectors in the 1880s, the sapphires eventually became the focus of the mining in the area. Please see the Yogo History page for more detail on the discovery and mining history of Yogo Sapphires. 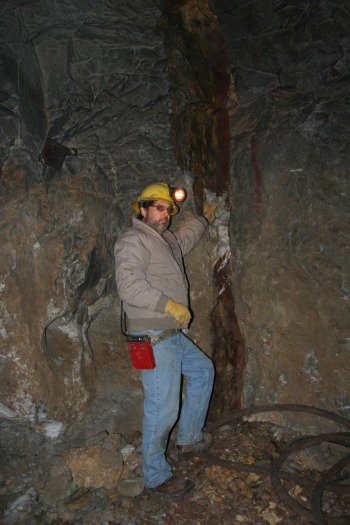 Gem Gallery owner Don Baide 360 feet down into the Vortex Mine
Internally, Yogo Sapphires are usually free of inclusions and their color is consistent throughout the whole stone; unlike heat-treated sapphires, where the color is banded within the stone. Heat-treating is very common in sapphires throughout the world to improve both the color and clarity of the stones, but the perfect crystallization of Yogo Sapphires during their geologic formation allowed them to have even coloring and very pristine clarity. With Yogo Sapphires, their color is one of the truest blues of sapphires available without treating, and is frequently referred to as “cornflower blue.” In fact, heating a Yogo is detrimental to its color, and the intense heat from a jeweler’s torch can lighten and destroy its beautiful, natural color.

(Never let any jeweler who is not aware of this work on your Yogo. The Gem Gallery uses a laser for repair work around Yogos to prevent the possibility of altering their natural color.)

Most recently, Yogo Sapphires have only been commercially mined deep underground. These sapphires occur along a five-mile long strike in the earth. Formed in lamprophytic material, Yogos were brought up from the deep mantle material through fractures in the country limestone referred to as dikes. Initially, the early miners mined Yogo-bearing rock from wider veins that were up to 20 feet wide, but over time these veins were mined out. Recent mining of the Yogo-bearing rock was limited to the narrow veins that are only 8-10 inches wide and 400 feet underground. 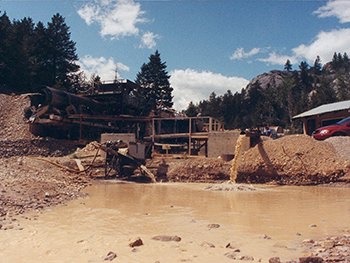 The trommel and wash plant at the Vortex Mine
The most recent mining process of the Yogo was considered very “green” and environmentally friendly. No chemicals were used and no waste water was released from the mine. The mine recycled all of its surface water, and the only waste material was limestone gravel that is used for road material. The surface impact of this mine was virtually zero, with the exposed working area of the mine being about two acres. The mining was a simple and slow operation of drilling and blasting the ore-bearing material. The process began with ore first being broken down in a rotating trommel; then the smaller material less than an inch in size is run over a pulsating jig. The sapphires, being heavier than the common rock, are then separated through the use of water and gravity. The larger Yogos are then handpicked out of the jig, one at a time.

Yogo Sapphires are a perfect blend of aluminum and oxygen with titanium; titanium being responsible for the blue color. The vast majority of Yogos come in a very fine cornflower blue. Some will occasionally have a trace of purple color, and even more rarely, a strong violet hue. The most rare of all colors will range from magenta to true red. These non-typical colors of Yogo Sapphires possess the same clarity found in the more typical blue sapphires. The crystalline structure of Yogos is hexagonal, with most crystals tabular and flat. They are often only found in very small sizes. Once cut, the true beauty of these gems is released.
British marketing experts arranged exposure for Yogo Universal Exposition in Paris, where the sapphires of Montana received a medal for their fine quality and color. However, European retailers were beginning to market them as Orient Sapphires, which, at the time, fetched a better price and were similar enough in color that Yogo sapphires could easily be substituted.

The Yogo deposit, historically, produced an abundance of small gemstones, generally weighing less than one-tenth of a carat. Finished cut stones weighing over one carat are considered rare. Occasionally, exceptionally large stones are found and can be cut and finished to over two or three carats. These Yogo Sapphires are extremely rare. If mining resumes, deeper mining will be needed to find these beautiful gems. Between mine closures and a need for deeper mining, the ultimate cost to recover these stones will increase. In today’s complicated world of treated and created gemstones, the Yogo Sapphire remains one of the few natural sapphires that never needs any treatment. Yogo Sapphires are truly a natural wonder. 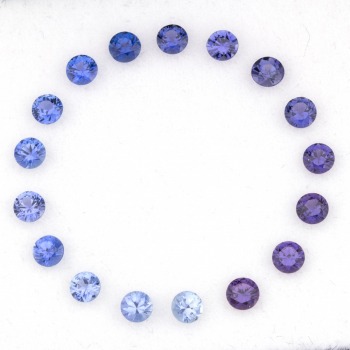 Yogo Sapphires come in a range of colors.